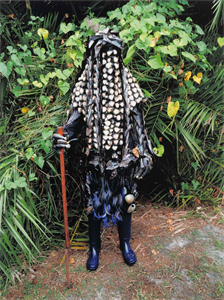 Cauleen Smith is an interdisciplinary artist currently based in Los Angeles whose work often reflects on Afro-diasporic histories. This photographic âportraitâ shows a mysterious figure shrouded in shells. In Smithâs Egungun: Ancestor Canât Find MeÂ (2017), a related video, the figure emerges from the sea and wanders zombielike in a lush tropical landscape before burying itself in the sand. Smith drew inspiration from Yoruban societies in West Africa where egungun,Â costumed dancers who appear at large public celebrations as visible manifestations of departed ancestors, are a significant spiritual and cultural presence. However, Smithâs version is more harrowing, as the figure appears lost and alone, perhaps representing the spirit of an enslaved African who drowned during the Middle Passage.

Smith created the Egungun photographic series and video during a residency on Captiva Island, Florida, where the remnants of shell mounds are all that remain of the Calusa, the island's original inhabitants. In Smith's film and photograph, the egungun serves as a figurative embodiment of the legacies of slavery and colonialism in the present dayâan unsettled ancestral presence severed from the lineage of its people and culture.
Collection List This object is a member of the following collections: