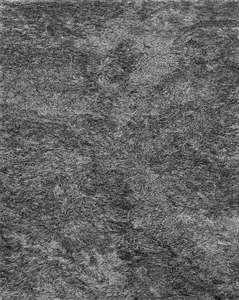 this trembling turf (the shallows)

Date: 2018
Medium: White ink
Object Dimensions: 60 x 48 in. (152.4 x 121.92 cm)
Credit Line: Purchased with funds provided by Seattle Art Fair, 2019.005
this trembling turf (the shallows) is part of a series in which Seattle-based artist Mary Ann Peters explores ways of markingÂ the overlooked or hidden evidence of subjugated peoples. Using white ink on black clayboard, the artist created an intricately textured surface composed of spikes and âblips,â as she has called them. The rhythmic pattern references the sound waves used by archaeologists to uncover buried traces of ancient civilizations.

Peters started her this trembling turf series in 2017 following an artist residency in Beirut, where she learned that the lush fairways of a local golf club are thought to overlay a mass grave: in 1982, a militia linked to the right-wing Maronite Christian Phalange party killed hundreds, if not thousands, of Palestinian refugees and Lebanese civilians in two refugee camps in West Beirut. Though created with these specific places and events in mind, Petersâs work is abstracted, opening broader questions she has posed when discussing the series, such as, âIs there a country on the planet that doesn't have the same kind of tormented past?â
Collection List This object is a member of the following collections: